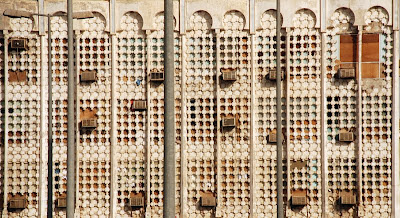 July '09
I started working on this project from summer 2009 as a step forward to understand our built environment and how Kuwait really changed in the 1960s. So started it as an observational phase because I am not a direct witness to the time. 1960s time is the critical point where the network of the nation is changed completely, yet not literally rebuilt.

When I thought of making the exhibition, I never thought of it to be a photography exhibition, but a visual experiment of a place we always hear about, pass by or use it as a name or reference to places yet rarely realized. So I visited many places in Kuwait to find a perfect location. Thus thought that Derwazat Abdulrazzaq, and Safat Square are perfect locations for such event.

October '09
Derwazat Abdulrazzaq because of the grand infra-structure solution which was never expected in any local perception at the time. an under-ground pedestrian subway, who would imagine such space in Kuwait back then? of course I speak of the local knowledge. We have to put in mind that spaces just like ads affect minds perception and control quality of thinking.

Safat Square because it is not planned to be a square when it was called so, it is in fact better translated Safat Yard, but because it is spacious it was a meet point of political, economical and social affairs. what happened there along history gave it the value of a place instead of a mere space. The value which the -so called- modern planning evolution respected and recognized it as a square. But looking at it in an urban or architectural sense, the space of the yard was important back then because of its contextual vitality, it used to be near the houses and the shops. the network was more dense that made Safat Yard a valid space of relief. After recognizing it as a square, the unpaved sand Yard is covered with expensive granite made it monumental yet no more serving any of the previously mentioned values. New houses have been distributed outside the city gates and all the houses inside have been demolished according to the new urban city. The city's density changed its definition, and people visual and experimental perception got distracted. and the Safat Yard can be called now a square, yet standing there as spacious sculptured historical yard. 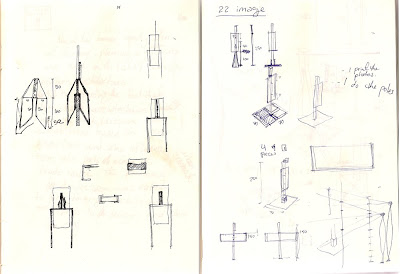 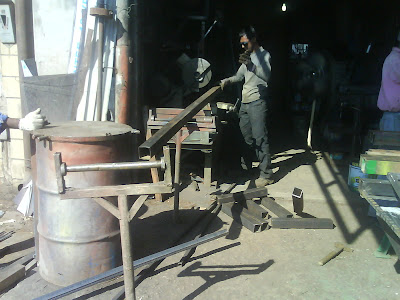 November '09
so after long filtering process during photo selection I ended up with 22 photos to be displayed, thought it is time to set my mind and start working on the installation since I want to make it outdoors. I made a sample of what I had in mind, but I thought and some friends of mine that it takes off from the power of the photo. although I loved it I found it heavy to deal with and maybe more expensive. I tried to think more and my brain drained until I thought of the most simple form. and I thought if I was to be given more time I would make it even more simpler, but I gave myself a deadline to make it on the 1st of December. A pole it was, to hold the photo. so I worked all day long with the blacksmith I managed to calculate all the iron bars I needed so the blacksmith was only to listen and do my commands -he didn't know what was he doing until we're done with one example-. he offered me a throne of an old office chair to sit on and used to write my text when he was doing the repetitive acts, thanks to Abdullah who sometimes helped me in this stage.

2 weeks to go
I started reviewing the books I read before about the subject along with designing the invitation. was extremely multitasking but thanks to Hussa for we worked together on the invitation. everything was flowing in harmony. writing endless drafts for the text of the study and the text of the invitation and try different translations showing to many people and see if they understand or get the gist of it.

1 week to go
The photos are printed, the installation is done and moved to the painter, and the invitations went online. and I got a permission for the two places thanks to the public parking company for they were very helpful. Finally I got the time to write the final draft of the article to be read in the exhibition. I thought of writing text for each group of photos but then when I started writing everything came together in a synthetic way that I couldn't work on analyzing. 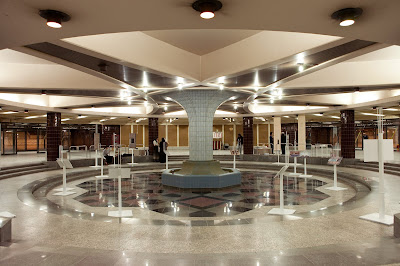 1st December '09 Derwazat Abdularazzaq
Khawla helped me carry half of the installation poles to the site, and I carried half in my car. we arrived there and started fixing the stuff. Marwa was there and Abdullah helped out with arranging the place. Sara helped cleaning the place and as fast as we finished I went to dress up and came back finding Aziz in charge with the PR and Muhammed and Yousif in charge with music, they put some Aisha Al-Marta and some other 60s type music. Marwa and Ahmed were asked to take the photos. Thanks all for making this night wonderful.

I appreciated the good number of visitors, I loved how the space which I always passed by during my work on this project suddenly had a lively moment. I really liked how random passers by stopped with amazement and started looking at the photos, some nearby coffee shops started to sell their drinks at our place, and the passing cats became more recognized. Some people had nostalgic moments without even passing here before and some acknowledged the walking experience to the place. I got introduced to really nice people and to a new place created with this simple event. 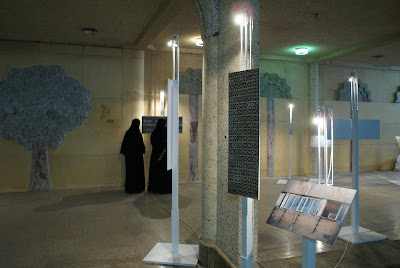 2nd December '09 Safat Square
we had to move the work to Safat Square, Khawla again helped me with this. we took the installation. Zahra and Marwa took the photos from the derwaza storage room to the Safat Square. I had to bring an electrician so he puts on the lights this time, I brought him to the site at 3pm and spent two hours searching for light fixtures for I couldn't find the kind I wanted. I arrived for them at 5:30pm they had all the wires distributed only had to place the lights, and flew back home to change and arrive on time. ah! 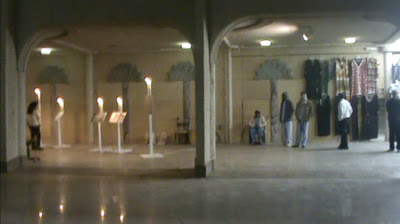 I loved the lights effect although the photos were not perfectly lit because they needed to be a bit angular on the photos not parallel as they were. the photos stood more like people which is more of the effect I wanted and missed in the derwaza, the shops started to spread their goods next to the exhibition. and more people came this time because Safat is more popular than the first place. Marwa took up the camera, Moudhy recorded the video and Dalal made the music playlist.

It was a nice evening, and I was more relaxed than the first night so I had the time and strength to explain and tour with visitors. At night some friends helped me out bringing the stuff back home because there is no store like in Derwazat Abdulrazzaq. So thanks to Abdullah big time!

Right after the exhibition I went to attend the exhibition at Sultan Gallery, and over there I met its curator Farida Al-Sultan who knew about my exhibition and couldn't have the chance to attend so she told me "bring it here!" so I asked for a date, she gave me one and worked on the preparations for the 5th of January with Charmaine, again thanks to both for hosting and arranging everything and also for the two handymen who helped me out in the exhibition day. 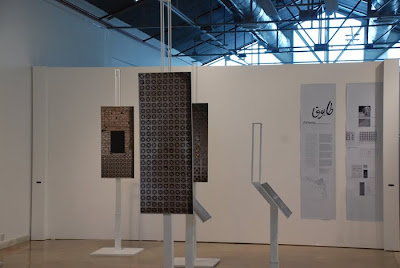 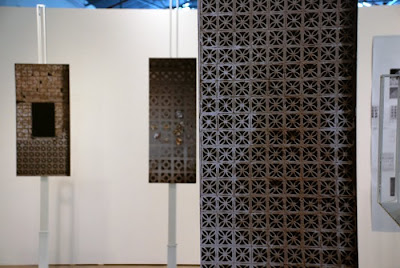 5th January '10 Sultan Gallery
The nature of the exhibition was much different than those I did before. It is more quiet and plane. it was meant to showcase the experiment as a whole. I got time to write the information of each photo, and I had to make a price list. Thus it went all professional and less sketchy. Also me and Marwa worked on editing a movie of the two places where the exhibition was held. Loved it so much thanks Marwa!! She helped me with it although she had another movie to work on. Will try to upload it whenever I got the chance.

After the exhibition lots of people were interested in participating in phase II of the project which included a data collection and survey of the 60s buildings. So we established a team to work together in the project. Thanks dear team and hope we continue till the end with a good achievement. I think I will start a blog to post updates on the project and request information we may lack. Because it is an architectural project, we need it to be social and collective; a wall always needs a person to be recognized as a wall.

In fact what made me work on this exhibition in the first place was to gain feed back on my process and my approach towards urban planning of Kuwait City. explaining the idea to many people made the idea more solid and mature than how it started to be. It became even more clear for myself which made me ready to step forward with more knowledge about the multi-aspects of the project.

Media Publicity
I didn't ask the media to cover the event, for I find it a social experiment rather a social projection besides I think architectural language in Kuwait is yet to be translated clearly. Yet there were some editors and reporters came by to write about the event finding it different in approach, and I really liked how they put it, thank you. and I also thank all the bloggers who posted about the event, and all of you who supported me by helping out, sending sweet messages, offering valid comments or simply involved in discussions during the event. 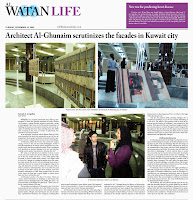 You really did a great job Deema :)

I actually attended the gallery, It was simply amazing, Gawwach allah. :)

قرمت
thanks 7ayyak allah, hope we all can see the second phase happen.

It was brilliant dear :-)
Looking forward for more to come ;-)