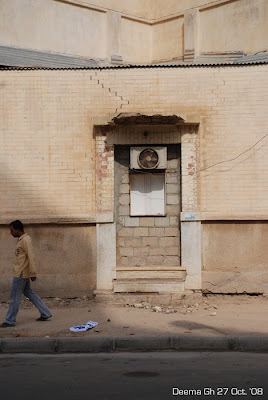 There are two parallel concepts over history that describe life; one which says it is deteriorating for the previous generations are higher in class and race-and psychologically we always encounter nostalgic old men or women to the "better past"-, and another which says that survival is for the better as it is explained in the evolution theories such as the natural selection, adaptations or the genetic drifts. Another example to that can be explained socially as the sudden change in a group of people from uncivilized to civilized according to a current standard of such description. I read such relationship in a book and was stimulated.

The following day, in the early morning, I was waiting for my colleague when I took this photo above. At the same evening, I attended a lecture which started with the early European perceptions of Damascus, and how there were lots of flaws and inaccurate determinations and facts either illustrated in maps or drawn on canvases. the lecture ended with photos of the "remains" which very much reminded me of the evolution theories which made it a sensual exploration of thought.

The remains shown in the recent pictures were very fragmented, yet they identify virtual lines. The remains have different positions and value in the city of Damascus nowadays, but everyone is saying that it is a deterioration of culture. I see it more as a deterioration in realization, because even the images of the past are struggling manuscripts from the memory of geographers or explorers. and then real facts of natural deterioration of certain places in the city caused from fire or earthquakes. Then comes different eras and functions in the city that assert some new configurations.
Once "realization" overcomes the highly judged as "deterioration", the term then will transit into the recent vision in a better understanding, and therefore a better description than "good" and "bad" will emerge. Consequently, what is visually sensed as bad is invalid, as long as reason is our good. The bad therefore is a hyper active sensor for the good.

The displayed image is a practical exercise of such theory, when you see a blocked door, you really feel bad about the beautiful entrance to be treated in this manner; blocking it and ruining the overall shape of the building. In reaching the realization level you can view that whomever live inside the building couldn't care less about it or at least have thought in a logical valid way. in needing the air condition inside this old building they either have to dig a hole in the wall of the facade or find an opening, the building has no windows, so the other option is closing the door, to a little opening to allow for the unit.
and the world will always be additive, in both physical and virtual senses just like this door, it will always remain "a door" in our virtual mind added from the physical details like the steps , dimensions, and the border. Yet physically, another additive process is applied, which is "a door filled with bricks to allow for the window unit".

Thus photographers are not shooting weird or even ugly things because they are artists who find beauty in everything. It is a long process of realization that requires somethings in the world to be frozen for a while to be thought about longer than the moment they saw it.

here is my reply to your comment on dar aziza blog regarding Alqabas comment on your lecture ;

as long as opinions satisfy the sense of wonder I appreciate it.