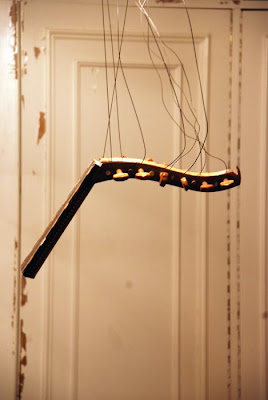 "I'm sure I heard its sound!" she said fiercely as she was examining her broken Oud. I was wondering how she heard its sound among all the children's fuss tonight, but I was silent. I know she loves that Oud very dearly although she never knew how to use it. She instead took many photos with it, very symbolic indeed, the Oud in our feminine room.

It is pretty old, and was given away to her two years ago by my uncle who seemingly lost the interest.

After an ironic silence she exclaimed in rather a threatning manner: "It is certainly Khaled! but I will ask each and every little thing came in this room this night."

"But don't ask them altogether", I said.

"I will, but not after asking each one of them individually. In this way no one will have a chance to cheat on me, they can't fool me" She replied with glowing eyes from the action of detecting. She left the room afterward to show my parents the horrible accident. And I was still thinking how Khaled -the youngest of all- could have the strength to do such harm to the Oud? The Oud's neck was sheared and all the strings were pulled so violently from their normal tension. Besides, how come a child puts back the broken Oud right in its place after shattering it to pieces?
There was a song in an old Kuwaiti operate about a man got his broken Oud fixed and confronting his teasing wife by praising it. I thought maybe the Oud is destined with despair and unfortunate events.

6 pm, biting her nails and her eyes wide open staring at the thinking position. She was revising the order of her questions.

I was late to the court of justice so I couldn't witness all the trial, I reached the "altogether" part. What I realized is that the defendants felt really sorry for the judge, they were trying to make it easy for her. They all denied it and she gave the broken Oud to them as a memorial of bad deeds.

I heard rumers after that about 6 years old Zaina, she is more likely to lie with the ease of a professional criminal. Zaina told me once that she doesn't like to listen to songs "I only like to compose songs" she explained with pride.

Everything is calmed down.

Two days later, we came back to our room at night. I didn't open the light depending on the hall lamp. I got a gentle strike on the head!
"Hey! what was that?!" I thought it was a hang fell from a shelf. I touched it and it was no hang, but something was hanged. She came in opening the lights.

The Oud's neck was hanged by its strings from the chandelier. It was dangling like a swing after the hit. It was fastened very carefully to the chandelier. There was even a small wooden piece to prevent it from falling if the knots ever loosen up. She tried to open it, but I stopped her. I told her that I like it, and I want to take a photograph of it. While I was taking the photos, she was asking my brother and parents about who hanged it, but no one did.

We allowed it to swing over our heads whenever we open the cupboard to get a dress.

My elder sister called, they traveled away for a vacation. She said her husband was opening the curtains in the morning, and suddenly their 3 years old son screamed: "THEY OPENED ALONE! THEY OPENED ALONE!"
"What are they my dear??"
"MY EYES!"

9 am, again I opened my eyes as if programmed to open them everyday at this particular time without alarm sounds. Staring at the ceiling, there were two blue tacks stuck since I was a child, I remember tiny gulls flying there, one less crowded than the other. I used to wonder about them, how real they were, and how I loved to make them move, when my father lift me high. they touched like ceramics, and they sounded so as I wave my hand in the middle of the gulls troop. I solved its mystery when my mother cut my hair after the chewing gum had fallen from my mouth while I was sleeping, but I still wondered how they found a blue chewing gum.
"maybe it's blueberry flavor" I used to say.

The chandeliers were gone as soon as we started to sleep in this room. I didn't notice that, I only remember myself watching them in the living room of our chalet. I remember this image because I was crying and fascinated with the light coming through my tears from a yellowish lamp right behind the cyramic gulls. As I tighten the muscles of my eyes, the birds looked bigger, and even more real, though blury. Then from my place on the ground I close one eye and try to pick the birds by my two little fingers.

I knew later that our room used to be the play room for my elder siblings until I grew older and my sister was born. They moved the books to my grandfather's room, the dolls to the books room and me and her to the dolls room and finally the birds to the chalet because we could reach them easily by standing on the beds.

"Isn't it wonderful to make a birds chandelier to revive those blue spots in the ceiling", said to myself as I recalled the great fall of those gulls, they were my obsession and I wonder if I was the one who destroyed them at the end.

She woke up and sat on her bed next to me, watching me with empty eyes. "I think it is time to remove that hanged Oud" she said in a lazy voice "it's annoying, I'm not used to it, it always hits me in the head".

Loved the sound track!!;)
and mashallah that boy!! adorable!!!
so who broke it?!
or is it possible that it did actually suicide cause she didn't play with it?!
very well written, like reading through torn pages of a book!:*
I missed the end,,


no one knows yet who broke it!
you wouldn't get a full answer from a child even if one of those kids spoke out.. :)
the end is now.. it is still hanged she said she wants to remove it, yet no one did removed it.. you say you wanna remove things.. but they stay..

I meant the sound track of the story,,
هذا عودي هذا عنتر لا تقولين عنه مكسر مكسر
maybe cause you wrote it, you didn't notice the effect, that was a touch of brilliance! I heard the song!:D
your most welcome! thanks is to you! keep up!:*

lol, i thought about it... did she real hear the music during the story but then i said naaa... it is probably the songs in the side bar..

who took the oud pic?